I’m so proud of my Bernie Bear! Not only did he defy my expectations, he continuously showed me how much fun he was having during his training class. He was smiling, tail wagging, eager in putting his best paw forward! He paid attention to me and followed directions like it was his job. In that moment, for that hour, it was his job and I was totally floored. I surprised because Bernie never responded to me so diligently until we got into class.

Its hard for me to believe, so let me fill you on the Bernie of yester year 😉 We adopted Bernie October of 2012. Eddie and I were volunteering at a Humane Society event. We had the lovely job of poop scooping, but we also took our time in checking out all the vendors at the event. There were people selling doggie clothing, to spraying painting on your pups and of course those selling delicious treats for us and them. As we made a pass around the event, Eddie asked me to accompany him over to one of the pet adopter’s tent and of course we went. As we walked over towards the dogs, there were about 6 six of them, all different breeds and sizes jumping and barking and trying so hard in drawing attention to themselves. We looked over and we saw Bernie. Bernie was just chillin’ in his crate. He was lying there just watching all the goings on at the event. Eddie was immediately drawn to him and asked to see Bernie. The rescue people were thrilled and maybe a bit surprised. We took him out and a quick little jaunt in the parking lot. Eddie immediately fell in love. He was ready to jump on board with adopting him. I, on the other hand was a bit more hesitant. I wasn’t yet a dog trainer, so I was unsure of my abilities in training him since our track record wasn’t established. Jack was still a bit of a terror and then add another dog which we didn’t know if they would get along, I was totally confused of what to do.

Bernie was so mild mannered when we met him. The rescue people shared with us that Bernie ALWAYS gets looked over at events since he just lays there. They shared that people ask them “what’s wrong with him, is he sick” because of his laid back nature. They even said they almost didn’t bring him that day too, with that being said, I was hooked on adopting him.

We shared with the pet rescue people our concerns (which was mostly centered around how things would go with Jack). They were willing for us to go pick up Jack and immeditely do a meet and greet. Eddie jumped into our little Ford Focus and sped the 25 min home. We were so excited. We knew if all went well, Bernie was coming hom with us.

We arrived back at the event an hour later and it look like everyone was packing up. We quickly searched for the rescue and the lady said, “I didn’t think you were coming back. There was so much attention paid to Bernie after we left, I said, he’s taken”. That brought a huge smile to my face. The piece of advice that was shared with me next, is something I continue to share with others: a good dog and dog interaction is when both dogs greet each other and then ignore one another. This is exactly what happened. Neither Jack or Bernie became overly concerned or too involved. Success!

Over the course of the next couple of months, we discovered Bernie was nervous. He was afraid of sounds and of Eddie. Bernie would back up away from Eddie and hide and start barking at him almost every time Eddie came in the room. Bernie would often hide under the bed during stressful moments (when I would drop something) or would refuse to eat if he perceived me to be leaving. He frequently had accidents in the house as well as other people’s houses. Eddie became disheartened since he was the one who picked Bernie and he didn’t know why Bernie had a hard time adjusting to him. I didn’t know the answer either, but I was eager and motivated in finding a solution.

As I enrolled and graduated from the dog training program, most of my practical application of the course material centered on Jack and Bernie. I applied concepts like learning theory and classical conditioning in improving the responses towards new stimulus and experiences. It was like magic! Both Jack and Bernie were less aroused in new and stressful situations. Now looking back, the ease of popping a treat or throwing a ball when something new happened helped create a positive association towards that new experiences which led Bernie in decrease his fear response when something unexpected were to happen. Genious!

Now fast forward a couple of years, and Bernie and I were preparing for Monday’s class. I’ve never really challenged Bernie’s obedience skills. He knows all of his cues, but I didn’t take him out in public spaces like stores on a regular basis and practice those skills. We have on occassion go to the local pet store and I would frequently drive around with both Jack and Bernie in the car, but I never thought it was enough. I did make sure he was exposed to unfamiliar dogs and people and I do know he loves the ladies, but it was a part of our life, it wasn’t a planned training regimen. I chose the option in taking both Jack and Bernie out as much as possible, but in the back of my mind, I always questioned myself, like I should do more with them. In any event, last night was amazing in my eyes and I couldn’t have asked for better execution in his tasks than what he gave, especially with recall. Bernie usually has this look on his face like he’s weighing the options of whether coming when called. Not last night. Bernie kept his attention on me and waited for me to release him from a sit. Wow! Also, Bernie calmly approached when the evaluator walked around with a walker and a cane. Bernie showed interested and fear never reared its head. Bernie’s body language remained loose and his tail happily wagging. A truly amazing sight.

I’m looking forward to see in the coming weeks how Bernie progresses. He totally rose to the occassion. He also didn’t show any shyness in front of the camera! 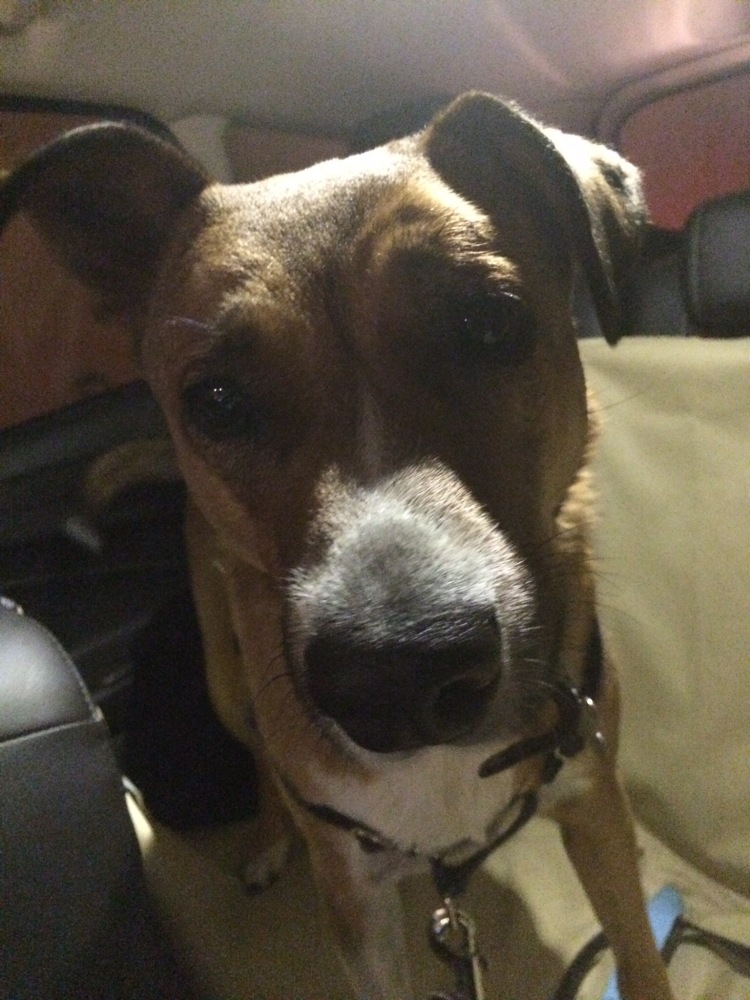 Katherine Porter is a force free, reward based dog behavior advisor and consultant serving clients and their companion dogs worldwide. Her calm and gentle approach in coaching clients in effectively communicating what they want to their dog blends her MSW background into her dog training and behavior practice. Katherine was a behavior consultant for Heeling Hounds after graduation. She opened Four Paws and You Dog Training LLC when the military relocated her family to Fort Sill, OK in 2015. During this time, she volunteered with Rainbow Bridge Can Wait where she provided post adoption consultations to new pet parents. She also developed and implemented tailored behavior modification plans for highly reactive dogs residing at the shelter. She also provided educational programs to military children through interactive workshops at the Fort Sill School Age Center. In 2017, Katherine relocated Four Paws and You Dog Training LLC to Germany. She served the Armed Forces communities in Bavaria. She continued coaching and advising her clients in addressing their companion dog’s fearful and reactive behavioral issues. Katherine takes a Do No Harm approach first and foremost in providing behavioral plans. She is committed in serving clients with gentle and modern science approaches in modifying behavioral concerns such as reactivity, aggression, separation anxiety and fear based responses. Katherine is a member of the Pet Professional Guild. She is focused on integrating a holistic and modern approach in addressing her client’s pet companion reactive behavior issues. View more posts