I have a special guest author, Lauren Piro sharing her story about her beloved canine companion, Bodhi. I first met Lauren in early 2000’s when we both worked at a mental health treatment facility for adolescent girls outside Baltimore, MD. Lauren worked as a music therapist and helped hundreds of girls cope with their mental health and traumatic personal experiences. She is well versed in understanding behavior and behavior modification with people, but also utilized this knowledge in transforming Bodhi.

Lauren is now self employed as a successful massage therapist in Washington, DC.

I am excited she is willing to share her personal story and sharing a glimpse into the trials and tribulations of working with and finding the hope in living with a reactive dog.

Bodhi and I found each other when he was just three months old. He was a male pit bull who had been neglected and mistreated by his breeder, and was then fostered by a friend before he came to live with me permanently when he was four months old. As a result, he already had a host of attachment and behavioral issues.

Lauren and Bodhi when they first became a family

One of the biggest was his insecurity, which manifested as him trying to dominate every situation. Whenever I sat down to relax, he would run back and forth throughout the apartment, and come at me while growling and lunging. Yelling ‘no’ and trying to discipline him only fueled his fury. Ignoring didn’t work. Crate training was also a non-starter. He proved a master escape artist, sometimes injuring himself in the process. When I reinforced the crate with heavy locks he ate through the plastic tray, the carpet, and the padding all the way to the concrete floor. I knew that I needed to take a more creative approach that addressed his unique needs.

My general approach to working with Bodhi incorporated obedience training, positive reinforcement, and nonverbal cues. Thankfully, he is very obedient, so it was easy to train him in the basics. Seeing him learn new skills so easily also helped me recognize that he really does want to be a good dog!

The first thing I worked with him on was loose leash walking. With Bodhi’s dominance issues, the structured walk was that much more important, and I made sure for him to walk behind or next to me so he sees me as his pack leader. I also used a gentle leader, which leads with his nose instead of from his neck, and makes him much easier to control.

Minimizing Bodhi’s anxiety took a lot of extra effort and time, even with simple tasks. For example, when taking him outside, he had to sit calmly before I would leash him. This alone could take several minutes. Once outside we worked on sitting calmly on the porch before the walk began. Since we live in a city, we used the command ‘wait’ at the end of the walkway to let other people and dogs walk by first, and show Bodhi where he stands in the pecking order. If he started to walk in front of me, get excited, or lose focus, we simply stopped until he sat and calmed down.

Meeting new people has always been a challenge for Bodhi. After several unsuccessful attempts at bringing him out on a leash to meet friends, I employed a different technique that has been really successful with friends who are dog lovers and willing to take the time to get to know him. When I have company, Bodhi stays in the back bedroom until he stops barking and calms down. Then I instruct my friends to completely ignore him. Using the ‘no talk, no touch, no eye contact’ rule as well as ensuring my friends stay seated, I can let him out freely. He usually runs around a little, whines a bit, and sniffs everyone. Once he settles down, I let my guests give him treats, while still avoiding eye contact. After that he’s usually ready to be pet and make friends.

Of course things still aren’t perfect and they never will be. He still has stranger danger when we’re out on walks. He still has to be sedated to be treated by the vet. And I still spend a lot of time reassuring him with phrases like ‘it’s okay,’ ‘you’re ok,’ ‘everything’s fine,’ ‘be easy.’ As long as he doesn’t perceive any direct ‘threats,’ he’s pretty responsive to that now and I can easily refocus him with gentle nudges and commands. 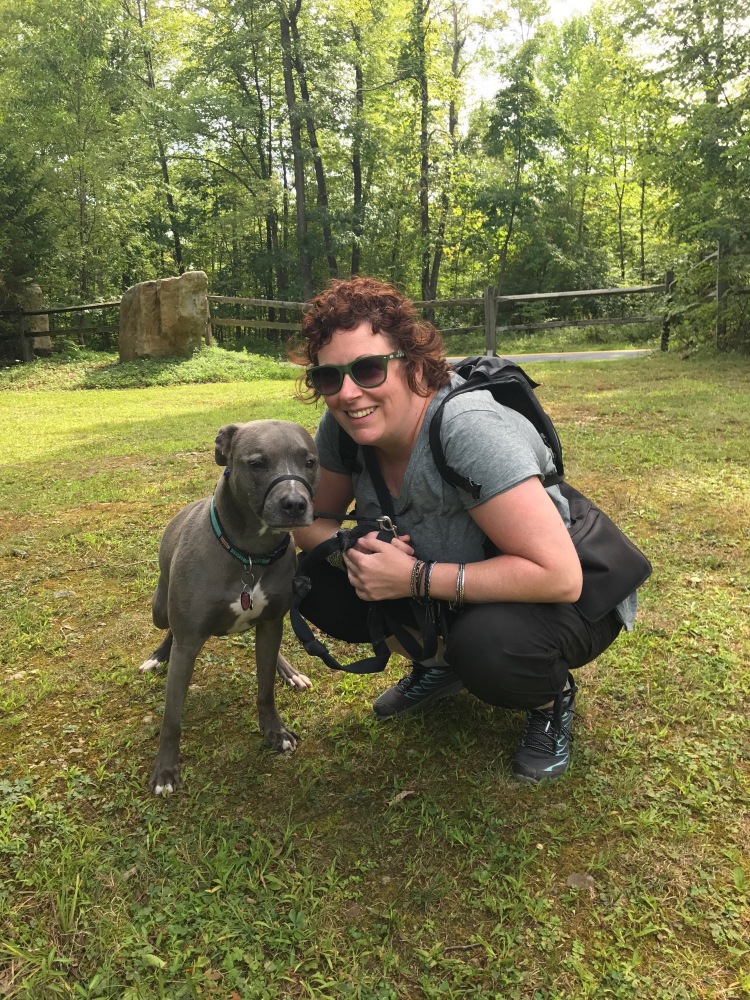 We’ve definitely had our rewards and challenges over the years, but knowing such a troubled dog hasn’t had to be put down, hasn’t hurt anyone, and has made marked improvements over our five years (and counting) together is a big win in my book!

Katherine Porter is a force free, reward based dog behavior advisor and consultant serving clients and their companion dogs worldwide. Her calm and gentle approach in coaching clients in effectively communicating what they want to their dog blends her MSW background into her dog training and behavior practice. Katherine was a behavior consultant for Heeling Hounds after graduation. She opened Four Paws and You Dog Training LLC when the military relocated her family to Fort Sill, OK in 2015. During this time, she volunteered with Rainbow Bridge Can Wait where she provided post adoption consultations to new pet parents. She also developed and implemented tailored behavior modification plans for highly reactive dogs residing at the shelter. She also provided educational programs to military children through interactive workshops at the Fort Sill School Age Center. In 2017, Katherine relocated Four Paws and You Dog Training LLC to Germany. She served the Armed Forces communities in Bavaria. She continued coaching and advising her clients in addressing their companion dog’s fearful and reactive behavioral issues. Katherine takes a Do No Harm approach first and foremost in providing behavioral plans. She is committed in serving clients with gentle and modern science approaches in modifying behavioral concerns such as reactivity, aggression, separation anxiety and fear based responses. Katherine is a member of the Pet Professional Guild. She is focused on integrating a holistic and modern approach in addressing her client’s pet companion reactive behavior issues. View more posts